More often that not, commentators describe the U.S. in terms of opposing forces. Democrats. Republicans. The reality? Central planners on both sides of the aisle readily support the reckless printing of money.

Granted, people in power may have good intentions with those newfangled dollars. Yet meaning well while simultaneously ignoring longer-term implications can financially devastate Americans.

Here are two ways to look at the level of money printing activity. In the first chart, we see that central planners created 25% more dollars in 2020 (M2) than existed in the year before. On the M1 Measure? 50% more money than the year prior.

Keep in mind, the Federal Reserve and the federal government’s reaction was far more constrained in the 2001 tech wreck recession and the 2008 financial crisis (a.k.a. “The Great Recession”). The powerful decision-makers in 2020-2021 deem the current actions necessary to prevent a 1929-style Great Depression.

Is this accurate, though? Or did policy makers overreact in ways that are likely to have adverse consequences?

Consider this second chart. Here we see that the Fed’s balance sheet near $7.5 trillion is heading for 40% of our $20 trillion economy (GDP). There’s never been anything like it in the history of the United States.

So far, the money creation is propping up stocks, real estate and other risky assets. Most are near all-time highs. (And that’s precisely what decision-makers were hoping for.)

What they weren’t hoping for? Bubbles. And those bubbles are absolutely, positively going parabolic.

Take a look at the extraordinary rise in share prices for tech firms that make no money. Since March alone, the entire investment community is throwing its hat into the profitless tech company ring. 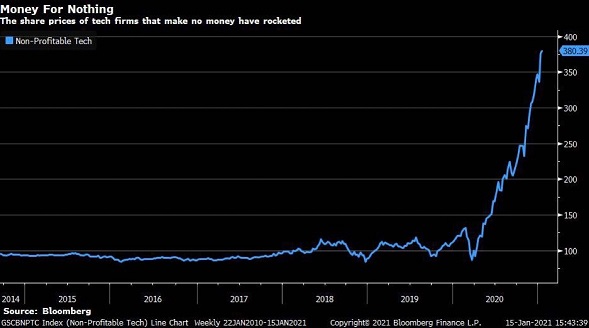 There’s more. Special purpose acquisition companies (a.k.a. SPACs) have been around for a few decades. They’re nick-named “blank check companies” because they have no commercial operations.

SPACs exist as a way to raise capital for acquiring a company showing unique potential. They’re extremely speculative and they represent a legal means for bypassing the traditional IPO process.

Why bring up the SPAC? In essence, gobs of excess money printing is pushing the price of blank check companies through the roof on the hope that they’ll acquire the next electric skateboard, speedboat or kayak.

Money printing by powerful policy makers has created a frenzy. And for the time being, participants feel like they cannot lose.

Longer-term? Speculative stock bubbles always crash-n-burn. Having a plan to sidestep the bulk of a future downturn will be critical to succeeding when the get-rich-quick crowd turns panicky.