For the last four months, the Federal Reserve has maintained its balance sheet rather than electronically print additional money. It would seem, then, that $3 trillion of monetary “stimulus” earlier in the year was enough to stop COVID’s Q1 bear crash in its tracks. (That, combined with another $2 trillion or so from the federal government’s CARES Act.) 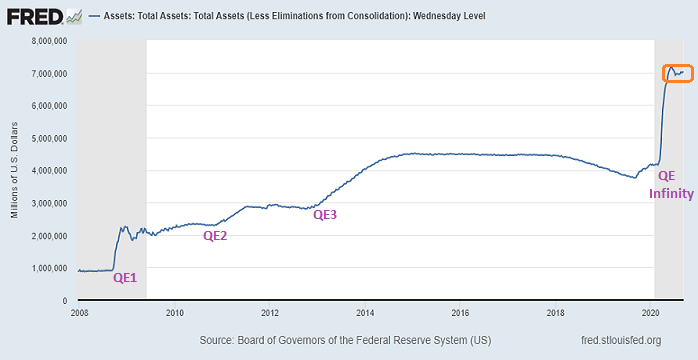 Looking forward, however, there may be no way to avoid additional quantitative easing (QE) money printing or the Fed’s endless rate manipulation. Consider these three reasons:

1. The federal government desperately needs the money. Going forward, trillion dollar deficits are now the norm. Both political parties are huge spenders. Foreign ownership of U.S. debt continues to dwindle. And existing trillions of Treasuries are rolling over in 2021.

2. The stock bubble gets pricked again. If the COVID crash was enough to unleash as much QE as the first, second and third iterations combined, why wouldn’t the Fed print trillions more to directly buy stock assets in a future sell-off? The Fed has proven that its number one mandate is to prop up the wealth effect for as long as it can.

3. The rest of Treasury bond curve. When the Fed is not manipulating borrowing costs lower with QE, interest rates on the longer end of the curve might rise on participant supply and demand. The Fed cannot afford to let that happen, as it would make it harder for businesses everywhere to service their debt payments. In particular, it could damage America’s love affair with low rate real estate payments and investment.

In truth, #1 above is a given. Spending and deficits will require Fed activity.

Yet, what if the 2020 stock bubble gets pricked again (#2 above)? Perhaps due to contested elections for control of the Senate and/or White House. Or maybe the increase tightening in private business loans might result in a commercial MBS blow-up similar to 2008’s subprime. Or perhaps it will be as straightforward as insane stock valuations.

Whatever pricks the stock bubble, the Fed will increase the money supply to buy more assets. Stocks. CMBS. Treasuries. High yield bonds. Anything.

What that means for precious metals like gold and silver? After the recent pullback due in large part to a dollar rebound in September, precious metals may be primed for another rocket move higher. (If you believe the Fed will keep printing money, precious metals are likely to keep appreciating in value.)