When Does the Fed Retreat?

The Federal Reserve is looking to navigate a path between fighting inflation and protecting markets. Granted, the central bank’s key mandates are to fight inflation and to bolster employment.

For the entirety of the 21st century, however, the Fed has concentrated on rescuing financial markets with little regard to its Congressional mandate(s). Instead, the Fed chose to prop up asset prices to keep a large percentage of citizens feeling wealthier. Wealthier people, the Fed reasoned, spend more money in an economy.

In recent memory, the Fed acted to support stocks when they fell 10%, 15%, or roughly 20% level. It has depended on committee member perception on the risk of not “acting.”

It is easy to recall the Fed flip-flops in 2011, 2018 and 2020. The central bank either provided money printing liquidity with asset purchases (a.k.a. “QE”), zero percent rate policy, or both.

Incidentally, many credit the above-mentioned moves with avoiding vicious 50% bear market disasters. Indeed, the Fed has arrested the development of catastrophes like those that occurred in 2000’s stock bubble and 2008’s real estate balloon/banking collapse.

Now, though, all the bailout activity has produced the most egregious asset bubble in the history of U.S. stock, bond, and real estate markets. 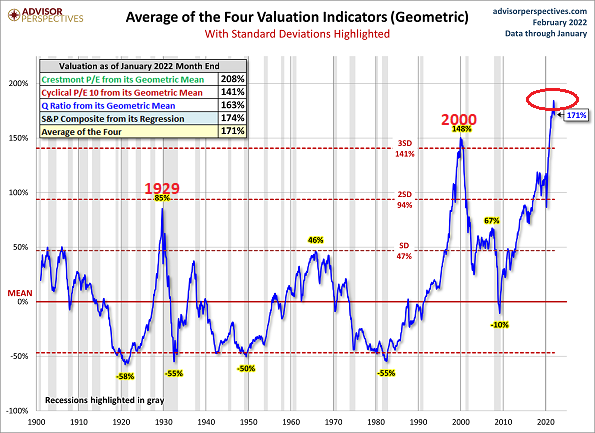 Investors may be encouraged by the notion that, while defending stock and bond prices is not part of the Fed’s Congressional mandate, they will do everything they can to prevent the bubble from bursting. The difference this time? The Fed may need to tolerate more losses while it fights inflation before it exercises its “put.” 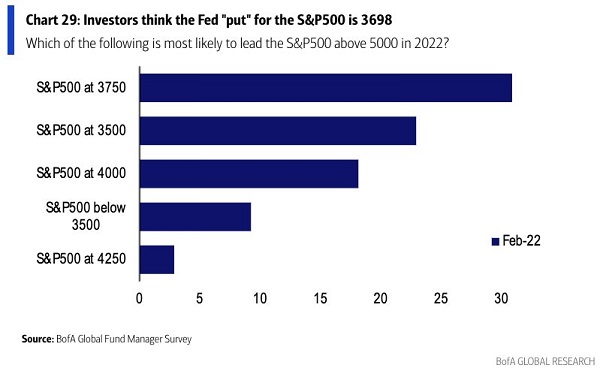 Perhaps unfortunately, fighting inflation via Fed tightening is running into challenges. They’re embarking on a campaign near March 15, while economic growth is already slowing down.

Blue-chip economists see first-quarter GDP coming in at 2%. That’s below the growth we’ve seen lately, albeit in line with a long-term average. However, the Atlanta Fed sees a mere 1.3%.

Raising rates into a weakening economy? How might that play out? 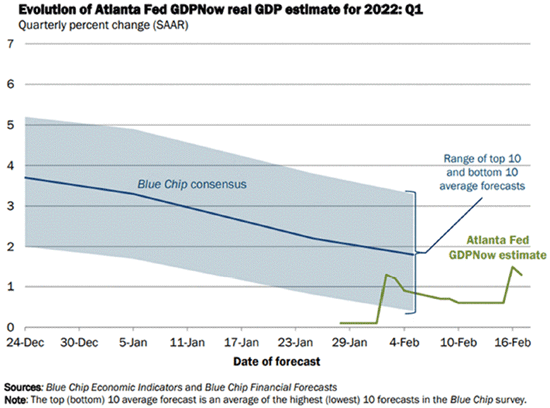 Even with stocks down 10%-11% from highs – a full-blown correction for the S&P 500 – the Fed has little choice but to tackle inflation. Rent, food, autos, energy, healthcare, furnishings, goods, services… nobody is escaping the higher cost of living.

It follows that our central bank will raise borrowing costs, damaging people and entities with high debt loads. The actions may eventually kill jobs as businesses look for ways to cut costs. 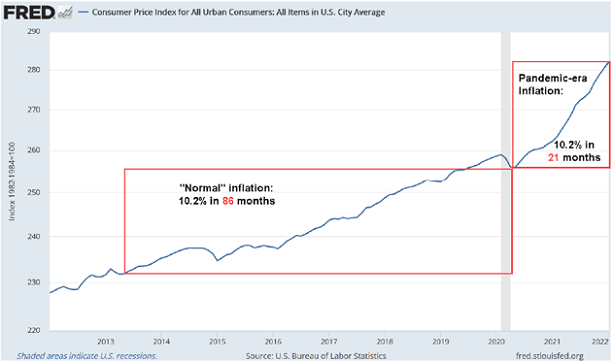 If there is one positive, a mild recession in the near-term is certain to bring about lower inflation. It happens every time.

Thus, if the Fed is aggressive, they might easily bring about negative GDP. And that alone would give them plenty of ammunition to reverse course yet again, providing stimulus and zero percent interest rates for as far as the eye can see.

Not that another recession would be fun for average Americans. But for those with assets? For those with stocks, bonds, and real estate? A quick recession like the one we witnessed in the pandemic would prompt the Fed to pump up assets.

Once more, then, the question comes down to the following: When does the Fed retreat?

That S&P number is anyone’s guess. A 20% shallow downturn seems like a fine place. Most investors would be able to grin and bear it.

If, however, the Fed does nothing as stocks continue to drop into sharper territory, the panic may resemble 2008’s financial crisis or worse. With stocks dropping rather precipitously prior to the central bank’s March 15 meeting – a get-together that is three weeks away – panic is hardly beyond the realm of possibility.