Consumer sentiment is downright abysmal. It is as weak as it was during the 2008-2009 financial crisis and during the early 1980s recession(s).

How downbeat are consumers? Data indicate that sentiment is 28% below an average reading. 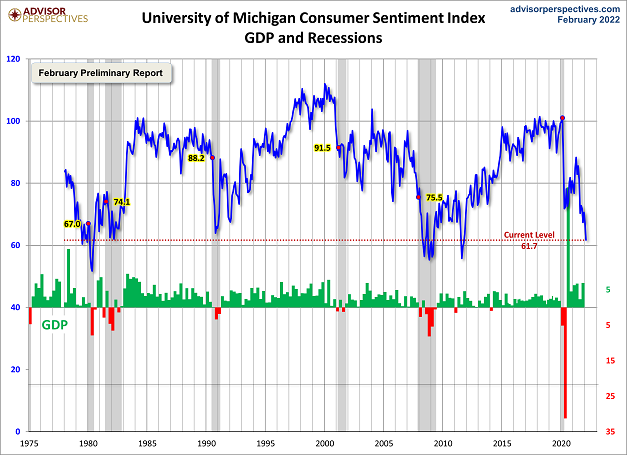 Consumer dissatisfaction is largely attributable to inflationary trends. That’s quite similar to the way things were in the early 1980s.

Back then, the Federal Reserve vigorously battled inflation with dramatic interest rate hikes. Recession or no recession, stock market bear or no stock market bear, the “Volcker Fed” was determined to restore purchasing power for everyday Americans. The chairman raised overnight lending rates from 11% to a record 20% at the beginning stages of the Reagan Administration.

Here in 2022, the “Powell Fed” plans to embark on rate hiking and quantitative tightening to manipulate borrowing costs higher. Stocks have already corrected 10% from all-time highs.

Will Fed inflation-fighting lead to more significant stock price depreciation? It certainly could.

Ironically enough, stocks were so undervalued in the early 1980s, the 27% stock losses were followed by one of the most powerful secular bull runs in history. The 18-year period of double-digit annualized gains culminated with the bursting of the stock bubble in 2000. 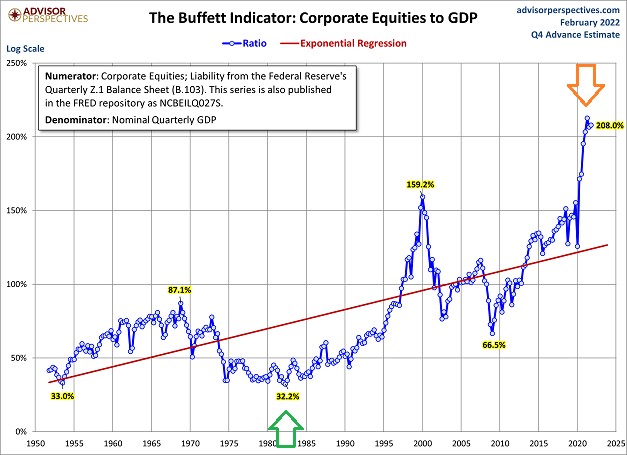 Now the Fed plans to tackle inflationary pressure at a time when stocks have never been more egregiously overvalued. That’s going to be some trick. Yet, with consumer sentiment in the proverbial toilet, the Powell-led Fed may not have a choice.

Stock optimists do have one arrow in the quiver, however. Reality.

Specifically, the Fed cannot raise its overnight lending rate a whole lot off of the zero-bound. In late 2018, the central bank ended its rate hiking at 2.0%-2.25%, back when the federal debt was $22 trillion. Now the federal debt is $30 trillion and climbing.

In effect, if we are going to continue paying the interest on the national debt, we likely require a Fed Funds Rate that is lower than it was in December of 2018. And certainly lower than the 10-year yield which currently stands at 2%. 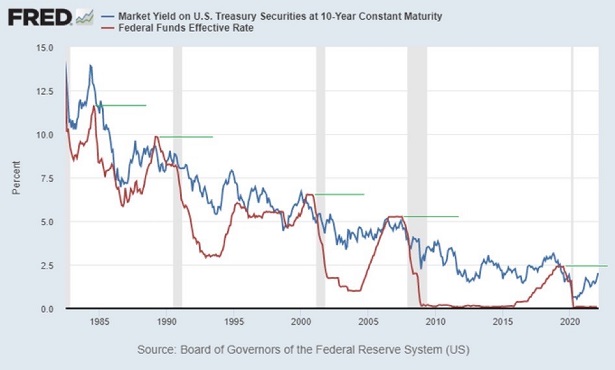 History shows that Fed hiking cycles have never been able to get as far as in previous cycles. If the previous cycle tapped out at a range of 2.25%-2.4%, then the current cycle is likely to finish meaningfully below that.

In essence, a Fed that is hiking 25 to 50 basis points every six weeks is likely to end its campaign in a year. Perhaps a year-and-a-half. At some point along that road, stock investors are likely to throw a big enough hissy fit that the Fed reverts back to money printing stimulus via quantitative easing (QE) and zero percent rate policy (ZIRP).

It follows that the most significant concern for stock investors is, “How deep do markets need to plummet before the Fed comes to the rescue?” A 20% bear market may have been enough in the 2010s. Here in the 2020s? Investors might want to think in terms of a 33% downturn.

On the other hand, if that decline were to happen before the Fed even began to nip inflation in the bud, the central bank could be stuck. It would lose credibility if committee member actions were perceived as bailing out wealthy stock owners at the expense of paycheck-to-paycheck Americans. The latter group requires stable prices on auto, rent, food, furnishings, products and services to survive.

Wealth inequality issues notwithstanding, stock investors are likely to receive stimulus candy in the foreseeable future. Until then, one should anticipate volatile stock swings as well as near-term depreciation, particularly in “growth” stocks.

When Does the Fed Retreat?
Caveat Emptor