The United States government raised taxes to finance the debt that accrued in World War I and World War II. Today, we are not engaged in a military intervention of monumental magnitude. However, the public debt-to-GDP is greater now than at any other point in American history.

Consequently, both the White House and Congress are looking at proposals to pay for everything from pandemic stimulus checks, corporate bailouts, and infrastructure projects. Indeed, if leaders keep campaign promises, taxes will go up significantly. 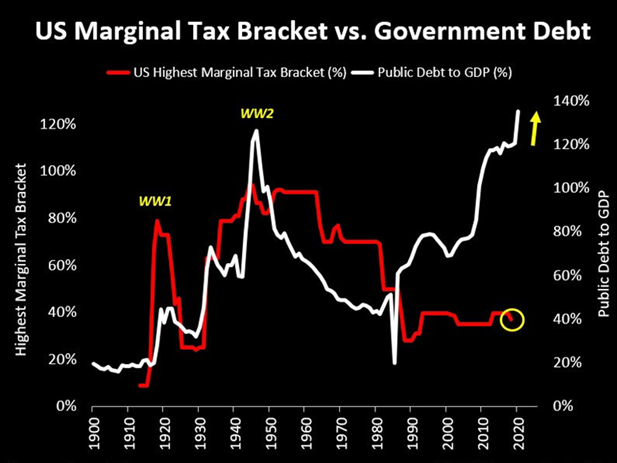 The stock market went from positive territory to negative territory on a report that the White House is looking to raise capital gains taxes on the wealthiest investors (4/22/2021). Following through on the promise could lead to a wave of selling pressure from those who might wish to lock in the favorable capital gains tax rates that exist today.

The idea that tax hikes will only affect the wealthy, however, is flawed. The wealthiest among us own the most stock. The more shares that they sell, the more pressure on prices to move lower. The lower that prices move, the larger the threat of “leveraged long” investors needing to cover their margin debt accounts.

In recent history, margin debt peaks have been associated with rapid stock price unwinding. The 50%-plus stock market losses in 2000 as well as 2008 occurred alongside margin debt reversals.

What’s more, the comparisons to the start of previous market downtrends are coming fast and furious. For example, the earnings yield (E/P) is as low (and lower) than most times in history. Only the tech bubble of 2000 and the housing bubble of 2008 can compete with 2021.

The Prices Are Not Alright
Never Has Anyone Ever