During the Great Financial Crisis of 2008, the Federal Reserve began adding like crazy to the supply of money (M1) via quantitative easing (QE). The Fed effectively added trillions of dollars to M1 Money Supply over the 2008-2019 period, indirectly supporting stock prices for more than a decade.

When the stock market broke down in February-March of this year (2020), the central bank served up “unlimited QE.” The action mitigated the stock bear’s liquidity panic.

With the M1 Money Supply going “vertical,” the stock market was able to bounce dramatically. The Wilshire 5000 is a mere 17% off 52-week highs. 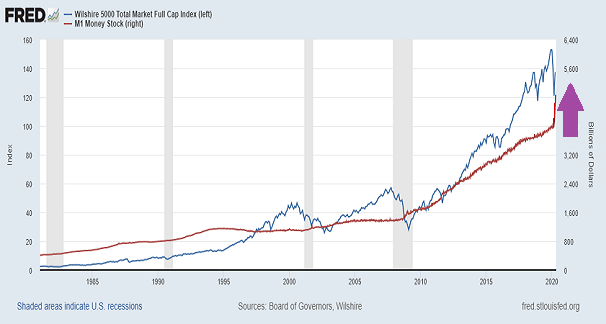 On the flip side, while the Fed is still adding to its balance sheet via asset purchases, the pace of those purchases has subsided. Gone is the ultra-aggressive central bank from late March. (See the blue line below.) 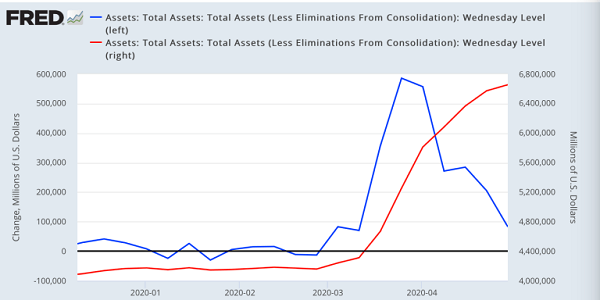 It follows that the stock market may already be reacting less favorably to a QE slowdown. Stocks have appeared to stall roughly halfway between bear market lows and an all-time record peak.

Wall Street bailouts notwithstanding, roughly one-fifth of the workforce has been sidelined. Similarly, wages have dropped sharply. That’s not going to be a boon for a consumer-based economy.

Nor will the trend toward increased savings. The percentage increase is the largest in 40 years. 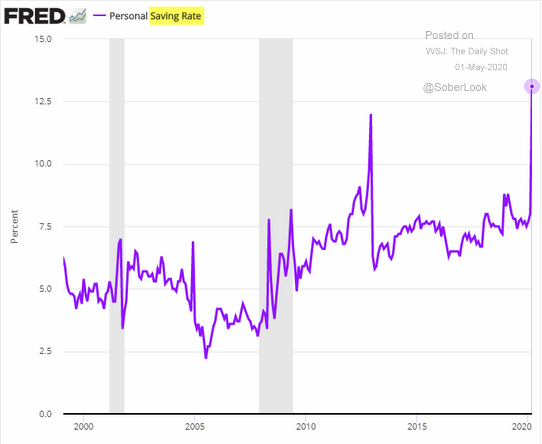 A shift away from saving and back towards consumption is unlikely to materialize quickly, regardless of when the country “reopens” for business. Without consumption, businesses do not receive revenue. Without revenue, those businesses cannot pay back their debts. And, if enough businesses go bankrupt, Fed money supply solutions would not be able to stop the stock market from more significant price depreciation.

The Great Disconnect: Stocks Vs. Real Life
The Consumer Will Not Recover Quickly