No Reckoning for Wall Street’s Worst

In every previous recession, corporations reduced their leverage to shore up their balance sheets. Not this time.

US corporate debt is heading for 50% of GDP. That is not just a new record… it’s other-worldly. 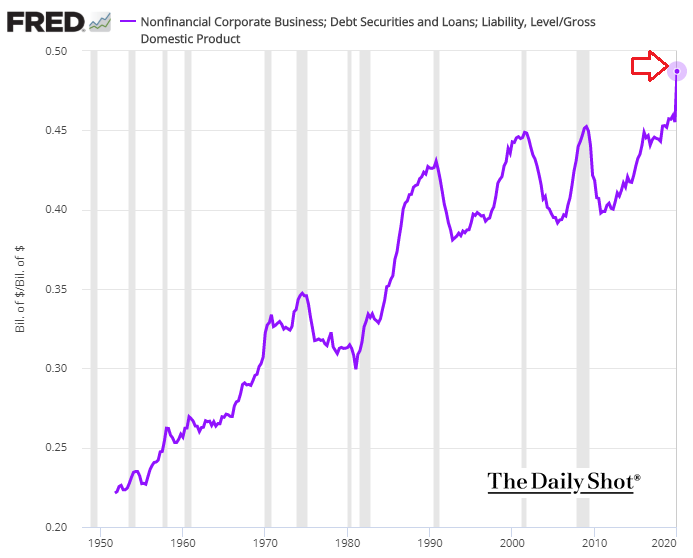 In 2000 as well as 2008, bubbly asset price excesses reversed course around the time that corporate debt-to-GDP reached 45%. In Q2 of 2020, as the economy contracts further and as companies issue even more debt, the U.S. stock market has managed to recover nearly all its bearish losses. 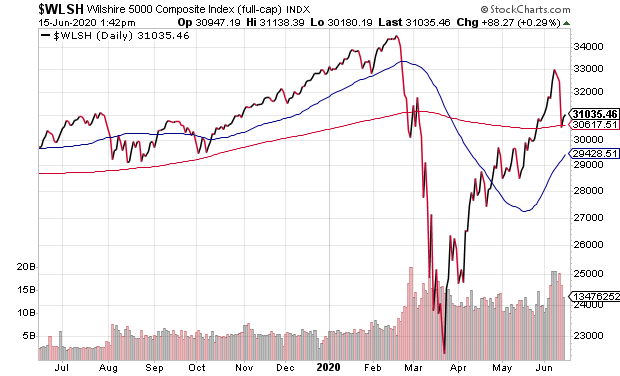 Is the euphoric price optimism justified by something other than Federal Reserve liquidity? Perhaps. Yet do not include profit margins.

The S&P 500 SPDR Trust (SPY) used to be highly correlated with margins. For the time being, however, the relationship between profit margins and stocks has been severed. 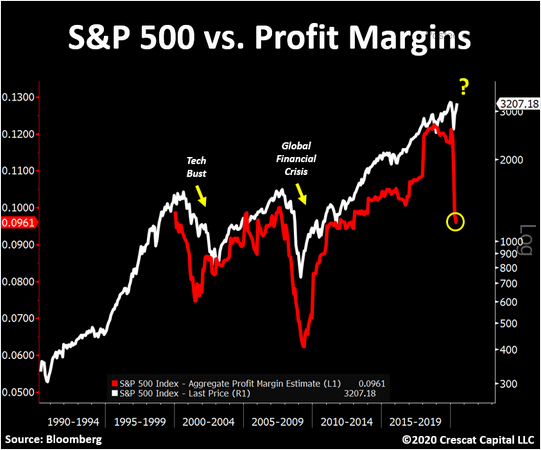 What about job growth? Certainly, the reopening of the economy would correlate with a massive wave of hiring, right?

Roughly half of all U.S. employees work for small businesses and those small businesses account for approximately half of net job creation. Yet these companies anticipate they will start 2021 with only three-quarters of the head count that existed at the start of 2020. 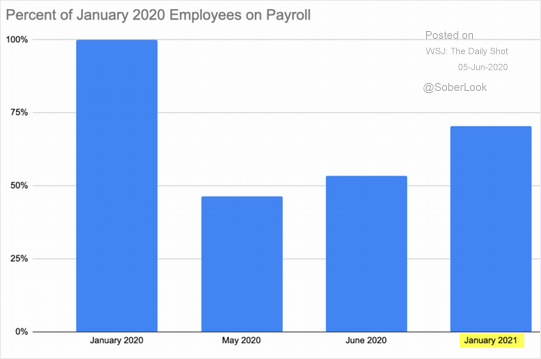 Consumers may have confidence in furloughed jobs returning and layoffs being temporary. On the flip side, businesses are telling us that many of those jobs are not coming back anytime soon. 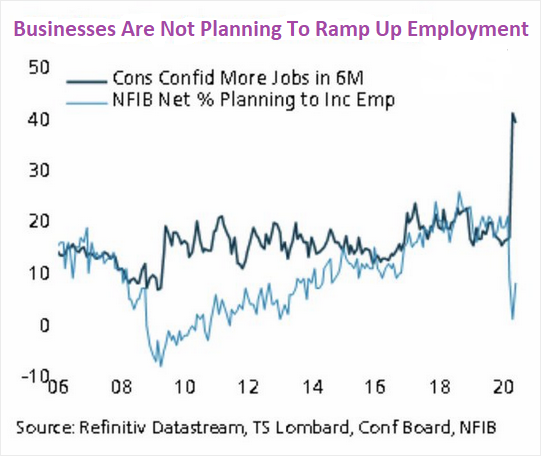 Keep in mind, unemployment itself has been dramatically under-stated. The classification adjustment alone puts U-3 unemployment at 16.3%, not 13.3%. Meanwhile, the overall picture is twice as grim as the Bureau of Labor Statistics (BLS) recently “reported.” 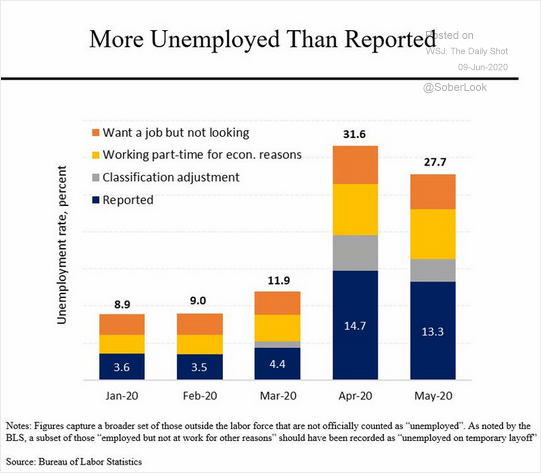 What many neglect about the pandemic’s impact, beyond job losses that can be attributed to demand and/or supply shocks, is “reallocation shock.” This refers to when firms, and entire industries, struggle with long-lasting impairment.

According to an analysis by Bloomberg Economics — based on the relationship between hiring, firing, openings and unemployment — 30% of U.S. job losses are the result of a reallocation shock. In other words, many furloughed and temporary layoffs will return quickly. After that, the structural damage will leave millions and millions still unemployed.

In 2020, stocks briefly fell 34% from top-to-bottom, and prices recovered in a few months. And that has occurred in spite of a far more insidious employment picture.

So, what is really going on here? Corporations are levering up to ungodly debt levels because they cannot generate enough sales or profits to thrive. And were it not for Federal Reserve policies to ensure the availability of borrowed dollars at favorable terms, more publicly listed companies would fail, and more investors would flee.

The question that the members of the Federal Reserve Open Market Committee (FOMC) are not asking themselves: Why are we bailing out companies with debt servicing costs that exceed profits? 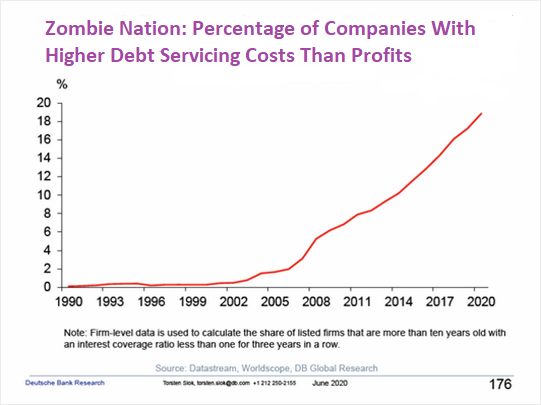 These companies do not deserve to be in business for long. And despite Fed intervention, they may not be.

With income restraints on households due to job uncertainty, highly indebted corporations will continue to struggle garnering enough cash flow. One should expect the trend of rising corporate defaults to continue.

The same holds for the bankruptcy trend. The “Hail Mary Play” at Hertz (HTZ) notwithstanding, bankruptcies wipe out stockholders.

Maybe the Fed money printing to buy federal government bonds and mortgage bonds are more powerful than economic gravity. Maybe Fed purchasing of state government bonds, mortgage bonds, investment grade corporate bonds and junk-rated corporate bonds can delay a reckoning altogether. Or, in contrast, perhaps the Fed will not be able to influence consumption, corporate sales or profitability in an economy that depends principally on consumer and business spending.

If profits and revenue still matter, then one should be concerned about insolvencies ultimately exacting a toll on financial asset prices. If not, maybe investors would best be served by knowing exactly when the Fed balance sheet is growing above or below trend. 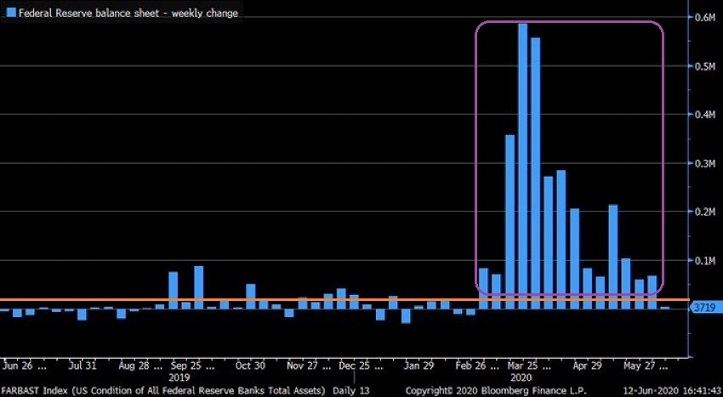 The current business cycle remains an exception to the rule. The deepest recession since 1929, with a mere 34% bearish retreat? With stocks less than 10% off a record peak?

Due to the high risk-low reward backdrop, my near-retiree and retiree clients have below-typical equity allocations. We believe that a second downtrend will occur alongside greater realization of economic hardship.

Nevertheless, we are always looking for opportunities in the following arenas:

1. Thematic. “Work-from-home” and “stay-at-home” has led us to pick up shares of growth prospects like Teledoc (TDOC), Fortinet (FTNT) and Logitech (LOGI). The “future of healthcare” has given us reason to consider gene editing/sampling providers like Crisper Therapeutics (CRSP) and Invitae Corporation (NVTA).

2. Potential Bargain or Discount. Admittedly, this one is a whole lot tougher since the stock market turnaround. We picked up Exxon Mobil (XOM) in the depths of energy market despair. I would always revisit it when the sector is being torn to shreds. Right now, Verizon (VZ) might be one of the few “bargains” out there. Some believe it is little more than an old-timers phone company. Yet Verizon is a big part of 5G as well as advances in internet-connected devices. A dividend yield north of 4% is not too shabby either.

3. Strategic. Knowing that downside risk is significant, and that the highest stock valuations in history may cap upside reward, I consider Innovator’s Defined Outcome ETFs. For example, right now, the S&P 500 Power Buffer for June (PJUN) is priced at $27.68. Inclusive of fees, it caps the annual price upside (through May 31) at 11.14%. And you are protected from approximately the first 15% (14.80%) of stock price downside if you hold the entire 350-day period.