The Invincibility of Apple

Apple is a phenomenal company. From smart phones to tablets, from music to television, the world loves what this corporation offers.

And it loves the stock. In fact, Apple (AAPL) may soon hit a market capitalization of $2 trillion.

On the flip phone side, are market participants paying astronomical premiums to get a bite? Is the $2 trillion price tag for Apple (AAPL) akin to a real estate investor paying $500 million for a $65 million home along the shores of Malibu?

At the tail end of 2018, the economy began slowing. It was not long before the stock market became spooked in an October-to-December beat-down.

The Federal Reserve quickly pivoted 180 degrees from modest tightening to outright easing. Indeed, by the 4th quarter of 2019, the Fed was already printing money again. And with 2020’s pandemic, the Federal Reserve went nuclear in its balance sheet expansion.

So now, take a look at Apple (AAPL)’s meteoric valuation shift since the slowing of the economy (Q4 2018). It  has become nearly as large as the combined market cap for all small publicly listed corporations. 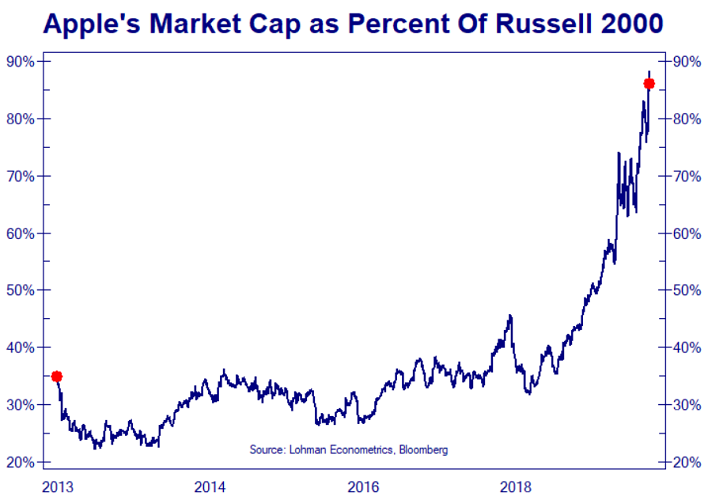 George Soros Abandons the Stock Bubble
How Skewed is the Stock Market?