However, some consequences of easy money policies have been less desirable. Budget deficits in the trillions are becoming a government norm. Meanwhile, inflation is so egregious, consumers are nearly as disgruntled as they were back in the early 1980s.

Earlier in the year, chairman Jerome Powell claimed that consumer price inflation (e.g., food, energy, goods, services, etc.) would be “transitory.” Now, he and his colleagues are acknowledging the fact that inflationary pressures are likely to persist.

The best way for the Fed to fight soaring consumer costs is to terminate money printing as well as to raise overnight lending rates. Will the Fed actually fight inflation and let the market stand on its own? Or can U.S. investors remain confident that the Fed would ignore surging consumer costs to rescue a market that falls 10%-20%?

Right now, the Omicron variant may serve as an excuse for the Fed to ignore surging consumer costs. Conversely, the Fed could view consumer inflation as the bigger threat to the economy. The latter would leave investors unsure about the price that they pay for U.S. stock ownership.

It is worth noting that the discrepancy between U.S. stock valuations and the rest of the developed world has never been this wide. In essence, one would pay 2.25x more for the privilege of owning U.S. stocks as opposed to owning developed market ex-U.S stocks (e.g., Europe, Japan, Australia, Canada, etc.). 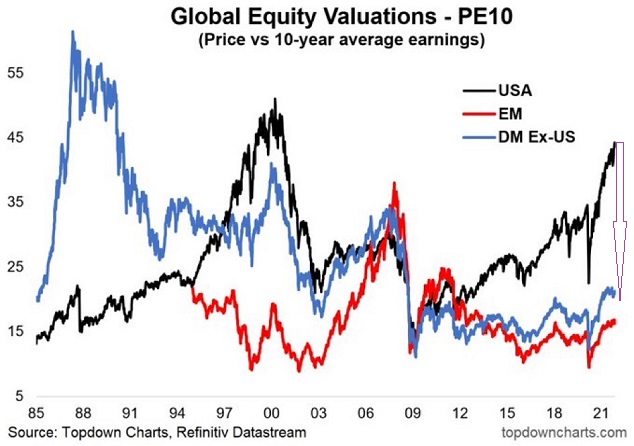 The Signs of Excess
Discrepancies Everywhere